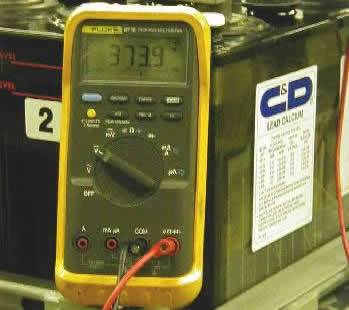 Load Testing can be described as a stress test for the battery system. A simulated load is placed on the battery and all external charging devices are removed so that the battery will discharge. During discharge the individual cells of the string can be monitored to find "weak points" in the battery itself. If a battery is thought of like a chain, the strength of the battery is as strong as its weakest "link".


Many battery failures are due to the failure of a connection due to a compromised connection because of high resistance. Pre-test readings should find out of tolerance readings prior to testing. The IEEE Standards all recommend periodic load testing of a battery system as "part" of its maintenance program. These testing programs are an analysis of the performance of the battery string as it relates to the manufacturers nameplate specifications. The frequency and effectiveness of the test is often performed improperly, with possible negative effects on the remaining life of the battery.

ATS provides complete automated test equipment manufactured by industry leaders. All testing is performed with industry accepted specifications and performed using safe, modern, simple and up to date procedures. The type of battery installed, age, environmental conditions and operating conditions all play part in determining the type of test performed.


An alternative to cell to cell monitoring is the loading of the battery in the same fashion as described above. During the discharge the total battery voltage and current are monitored for analysis. Although this procedure is not as complete as cell monitoring, the user will still get a picture as to the performance of the battery string as compared to the manufacturers profile. Total voltage and string current monitoring alone is far less thorough yet far more economical and much simpler to perform.


ATS Takes The Steps To Ensure A Safe Testing Environment 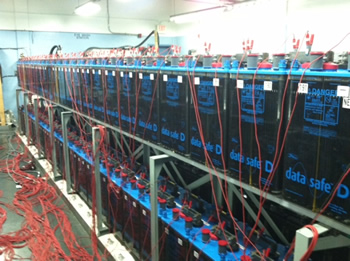 Prior to performing a test, it is necessary to follow a series of procedures to ensure a safe testing environment. This involved performing pre-test inspections on the battery to be tested for loose connections, apparent internal cell problems, state of charge and temperature of cells. Additionally, it is necessary to follow manufacturers operating procedures that will guarantee the state of charge of the battery prior to testing.


Load testing, or simulation of load can be performed following several different methodologies. The types of load testing that ATS offers are as follows:


An IEEE Test is a constant current or constant power load test that provides the user with a snapshot of the battery performance as it correlates to the life curve as provided to the manufacturer data and is temperature compensated. This test is performed to a specified end battery voltage and allows for analysis of cell as well as total battery performance. The IEEE Performance Test is safe, non destructive test if performed properly, and following a schedule as specified throughout the industry.


A Profile Test is a variable current test performed with a series of step currents. The Profile Test normally is used in applications for testing a switch-gear battery or other stand by device to prove that the battery end voltage does not fall below a critical level. Profile testing is also used to prove the integrity of the connected load and is not based on manufacturers rates. The test is an arbitrary load test that uses the customers designed criteria.


A Rundown Test helps the user monitor all critical parameters in the battery string during a load test. This can include, each cell, total string voltage and current. This testing is often used when testing UPS Battery Strings when AC Load banks are connected to Load the UPS System. During the rundown test parameters are watched in real time mode, with all parameters updated once every few seconds on a computer screen. Additionally, ATS equipment performs a performance analysis and reports any parameters that are considered out of range or unsafe.


Let ATS assist in determining just how well the installed battery will perform and predict how long before a battery replacement is needed.
Click to complete our quick contact form to get more information
about ATS's battery load testing.